Journalist: Again, I was on my way to London, through towns and villages that
were blackened ruins, totally silent, desolate, deserted. Man's empire had passed away,
taken swiftly and without error, by these creatures who were composed entirely of
brain. Unhampered by the complex systems which make up man, they made and used
different bodies according to their needs. They never tired, never slept and never
suffered, having long since eliminated from their planet the bacteria which cause all
fevers and other morbidities.

Jeff Wayne - The Artillery-man And The Fighting Machine

The hammering from the pit and the pounding of guns grew
louder. My fear rose at the sound of someone creeping into the house. Then I saw it
was a young artilleryman, weary, streaked with blood and dirt.
ARTILLERYMAN: Anyone here?
JOURNALIST: Come in. Here - drink this. 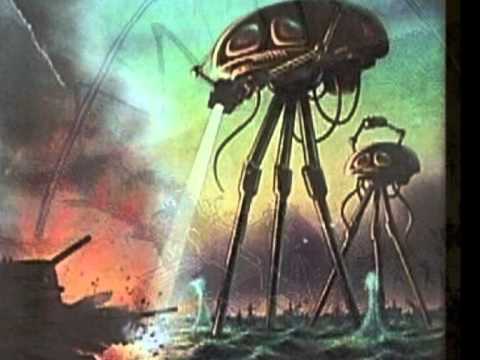 The steamer began to move slowly away - but on the landward horizon
appeared the silhouette of a Fighting Machine. Another came, and another, striding over
hills and trees, plunging far out to sea and blocking the exit of the steamer. Between
them lay the silent, grey Ironclad 'Thunder Child'. Slowly it moved towards shore; then,
with a deafening roar and whoosh of spray, it swung about and drove at full speed
towards the waiting Martians.
PEOPLE: There were ships of shapes and sizes

Jeff Wayne - The Eve Of The War

No one would have believed, in the last years of the
nineteenth century, that human affairs were being watched from the timeless worlds
of space.

No one could have dreamed we were being scrutinized, as someone with a microscope
studies creatures that swarm and multiply in a drop of water. Few men even considered
the possibility of life on other planets and yet, across the gulf of space, minds
immeasurably superior to ours regarded this Earth with envious eyes, and slowly and

There were a dozen dead bodies in the Euston road, their outlines softened by the black dust. All was still, houses locked and empty, shops closed, but looters had helped themselves to wine and food, and outside a jewelers some gold chains and a watch were scattered on the pavement.
Martian: Ulla!
I stopped, staring towards the sound. It seemed as if that mighty desert of houses had found a voice for its fear and solitude.
Martian: Ulla!

Next day, the dawn was a brilliant, fiery red and I wandered through the weird and lurid landscape of another planet; for the vegetation which gives Mars its red appearance had taken root on Earth. As Man had succumbed to the Martians, so our land now succumbed to the Red Weed.

Wherever there was a stream, the Red Weed clung and grew with frightening voraciousness, its claw-like fronds choking the movement of the water; and then it began to creep like a slimy red animal across the land, covering field and ditch and tree and hedgerow with living scarlet feelers, crawling! Crawling!

I suddenly noticed the body of a Parson, lying on the ground in a ruined churchyard. I felt unable to leave him to the mercy of the Red Weed and decided to bury him decently.
Beth: Nathaniel! Nathaniel!
Journalist: The Parson's eyes flickered open. He was alive!
Beth: Nathaniel! I saw the church burst into flame! Are you all right?

Pasadena Control: It's looking good. It's going good. We're getting great pictures here at Nasa Control, Pasadena. The landing-craft touched down on Mars 28 Kilometers from the aim-point. We're looking at a remarkable landscape, littered with different kinds of rocks - red, purple.... How 'bout that, Bermuda?
Bermuda Control: Fantastic! Look at the dune-field.
Pasadena Control: Hey, wait. I'm getting a no-go signal. Now I'm losing one of the craft. Hey, Bermuda, you getting it?
Bermuda Control: No, I lost contact. There's a lot of dust blowing up there.

The torment was ended. The people scattered over the country, desperate, leaderless, starved... the thousands who had fled by sea - including the one most dear to me - all would return. The pulse of life, growing stronger and stronger, would beat again.
As life returns to normal, the question of another attack from Mars causes universal concern. Is our planet safe, or is this time of peace merely a reprieve? It may be that, across the immensity of space, they have learned their lessons and even now await their opportunity. Perhaps the future belongs not to us - but to the Martians?

Then on the nineth day, we saw the Martians eating. Inside the hood of their new machines they were draining the fresh, living, blood of men and women, and injecting it into their own veins.
Parson: Aaaaah! It's a sign! I've been given a sign! They must be cast out! And I have been chosen to do it! I must confront them now!
Journalist: No, Parson, no!
Parson: Those machines are just demons in another form. I shall destroy them with my prayers! I shall burn them with my holy cross! I shall-

For three days I fought my way along roads packed with
refugees, the homeless, burdened with boxes and bundles containing their valuables.
All that was of value to me was in London, but by the time I reached their little
red-brick house, Carrie and her father were gone.
The summer sun is fading as the year grows old
And darker days are drawing near
The winter winds will be much colder

Next morning, a crowd gathered on the Common,
hypnotized by the unscrewing of the cylinder. Two feet of shining screw projected
when, suddenly, the lid fell off!

Two luminous disc-like eyes appeared above the rim. A huge, rounded bulk, larger than
a bear, rose up slowly, glistening like wet leather. Its lipless mouth quivered and slavered
- and snake-like tentacles writhed as the clumsy body heaved and pulsated.

Michael Jackson - This Is It

Wet Wet Wet - Love Is All Around

Adam Lambert - Whataya want from me